A good cup of Espresso!

A good cup of Espresso is everything you need to start a powerful day! It is a well-known fact that the Italians love coffee.

They have also invented a coffee culture that is unparalleled to any other place in the world. The coffee drinking habits and culture of the Italians may not be easy for foreigners to understand, but these habits are considered as the norm in Italy:

- The term ‘espresso’ is not used – locals just order ‘un caffè’, which refers to a single espresso.
- Never order a cappuccino, caffé latte, or any other milky variations after the morning has passed.
- Do not belittle this tiny cup of caffeine, an Italian espresso is a real charge of energy.

Enjoy your coffee the Italian way,  but where in Italy? One thing is sure: wherever you’ll come, everyone will get addicted, because a coffee savoured in Italy will cause beneficial effects like energy charge, good mood and a smiley day!

Trieste, the daughter of a Mitteleuropean tradition that remains deeply rooted, has a historical relationship with coffe going back more than 200 years. The link was established in the eighteenth century, when the city became a free port ready to receive beans from plantations around the world to supply cafés throughout the Austro-Hungarian Empire, especially those in Vienna, in the twentieth century becoming a global reference point for coffee.
For the residents of Trieste coffee is not just any beverage! They have such a strong connection with this beverage that they have coined a lexicon of terms to indicate the various options and possibilities. So, if you are in Trieste and would like to order a coffee, keep in mind the following:
•    for an espresso in an espresso cup, order a NERO
•    for an espresso macchiato (espresso with a splash of frothed milk), order a CAPO
•    for an espresso with a drop of frothed milk, order a GOCCIA

Remember that this is only true for the city and province of Trieste. If you go to Monfalcone, in Sicily, and ask for a NERO, they will bring you a glass of red wine… so be careful! 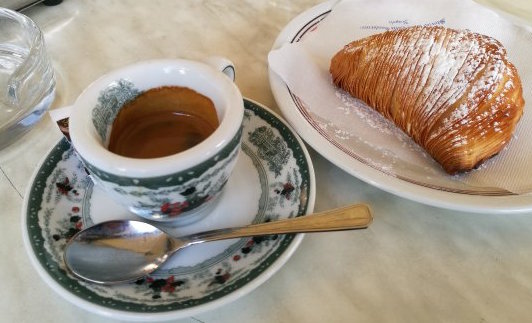 Traveling to South, arriving in Naples and asking for information about coffee, the residents will convince you that Italian coffee “espresso” was born here!
Coffee and the city of Naples have an inextricable relationship. Neapolitans often enjoy an espresso break standing al banco at a cafe chatting with the barman.
What makes Coffee in Naples so special…
•    Water: Good quality of water influences also pizza dough
•    Cup must be extremely hot, because Neapolitan coffee has a very short life and a temperature drop turns your coffee into an undrinkable beverage!
•    …again water – Coffee, without being asked, is always served with a glass of sparkling water: it prepares you to taste of coffee and helps its digestion.

Remember that this is only true for the city and province of Naples. If you go to Milan and ask for a glass of sparkling water, you pay for it… so be careful again!

Looking for ideas for your next event to Italy? Tell us about it!